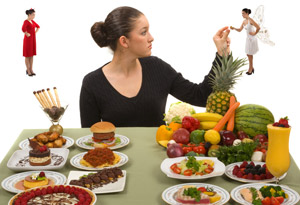 While society overwhelmingly associates success and beauty with being slim and physically fit, an alarming percentage of the population in the developed world is actually overweight or even obese.

The booming weight-loss industry and the staggering proportion of income consumers are willing to spend on the next “get fit fast” promise clearly indicate that no one wants to be obese.

On top of that, numerous studies have proven the direct connection between obesity and numerous heath issues, including cancer, diabetes, cardiovascular disease and many more. That alone should be enough to inspire people to make a change.

So why are we still fat?

It’s not as simple as eating fewer calories and exercising more, as there are various genetic, economic, social and cultural factors that could contribute to our propensity to gain or lose weight.

Parents who are obese often have children who are obese, which could be due to a combination of economic, social, cultural and genetic factors. Some studies have identified gene variations that could influence tendencies to overeat or that impact metabolism.

Highly processed foods have very little nutritional value, as they are typically produced using low-cost chemicals and refined ingredients. They are often less expensive than more nutritious whole foods, which appeals to the economics behind consumers’ purchasing decisions.

Food companies want you to buy their products, and many will go to great lengths to gain share of the consumer dollar. This includes advertising products with misleading claims that appeal to the social criteria of their target audience.

Being misinformed is another factor contributing to obesity, as there seems to be a lot of confusion over what we should or shouldn’t be eating. For example, previous recommendations to eat more carbohydrates than proteins, which contain fats, have probably added a few pounds to our scales. In addition, most people who restrict calories to lose weight often gain it all back plus a few extra pounds.

The biggest reason for this confusion is that not all calories are created equal, meaning that our bodies do not process all calories in the same manor. In fact, studies looking at protein, carbs and fats have shown that metabolizing one calorie of protein burns the most calories, while metabolizing fat burns the least and carbs fall somewhere in the middle.

It’s becoming increasingly clear that there is no one cause for obesity, and unfortunately, the same holds true for how we lose weight. What works for one person may not work for another, and we need to consider all of the various genetic, economic, social and cultural factors that come into play.

While there is truth in the fact that in order to lose weight we need to burn more calories than we consume, it’s important to remember that not all calories are created equal. Therefore, the focus should be on eating better (i.e., choosing whole foods over processed foods) and not necessarily on eating less.