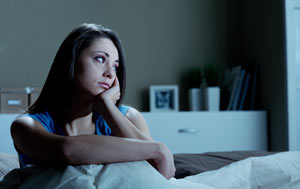 Scientists took measurements of the brain waves of 26 older adults who did not have Alzheimer’s while they were sleeping. They found that the ones who did not sleep well had brains with more amyloid plaques in them than did the ones who slept well. The researchers also found that the adults who slept poorly and had amyloid plaques did worse on memory tests administered both before and after sleep.

In one study involving mice, the scientists kept them on an inconsistent and erratic sleep schedule akin to that experienced by many human shift workers. The mice suffered significant and irreversible brain damage, for 25 percent of the neurons in their locus coeruleus decayed. The locus coeruleus is a part of the brain stem that controls wakefulness, arousal and some cognitive processes. Scientists have also found that the brain shrinks over time in someone who doesn’t get enough sleep. The process is quicker and more severe in people over 60.

In addition, the lymphatic system and the brain’s glial cells work together to clean toxins and waste out of the brain. They do most of their work at night. In fact the glial cells and lymphatic system are ten times more active during a person’s sleep than during their waking hours. Among the toxins they clear out are proteins linked to Alzheimer’s.

Sleep problems in the US

Tips for getting a good night’s sleep