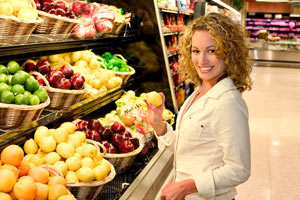 The importance of eating a balanced diet and getting regular exercise have been promoted to the general public for some time now. Consumers seem to be getting the message and are hitting the gym in record numbers. But the health benefits of daily exercise may be hampered by the fact that most consumers’ balanced diets don’t actually include very much real food.

As crazy as that sounds, it’s true. Mechanized farming and genetic modification have actually reduced the overall quality and antioxidant value in many of the fresh fruits and vegetables we consumer. But what’s even worse is that many time-strapped consumers turn to prepackaged, processed foods and drive-thru restaurants for a majority of their meals. This is not real food.

Conventionally grown fruits, vegetables and grains are typically genetically modified and use dangerous toxins such as chemical fertilizers and pesticides, and traditionally produced meats and seafood often contain added growth hormones and antibiotics. Consuming such toxins is something everyone should avoid, not just athletes and gym goers.

In addition, processed foods tend to be high in sugar, salt and unhealthy fats, which have been linked to increases in obesity, various diseases and chronic ailments.

However, real foods, such as organic fruits, vegetables and grains, grass-fed meats and wild-caught seafood do not contain any of these toxins, and in some instances may have higher nutritional or antioxidant values.

Why we need real food

Food fuels our bodies, and while the quality of foods we choose is important for everyone, it’s especially important for athletes and exercise enthusiasts who need to replace vital nutrients and energy expended during a workout.

In addition, consuming high levels of antioxidants has been shown to decrease the risk of certain diseases.

What you can do

Increasing your daily intake of real foods isn’t all that difficult. A good place to start is by choosing organic fruits and vegetables. While organic produce can be a little more expensive, it’s easy to mitigate the higher costs by buying what’s in season in your area instead of paying extra for out-of-season produce that had to be transported.

Another good idea is to avoid processed foods whenever possible. While this may mean a bit more meal planning and cooking at home, you’ll likely see an increase in your energy level, which will make it well worth it.

Lastly, try to stay away from foods that are high in unhealthy fats, salt and sugar. This is a tough one for most people, as it usually means avoiding fast food altogether, but you’ll see big improvements on the scale if you’ve been working out in an attempt to lose weight.