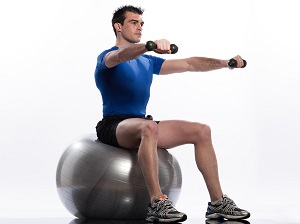 What’s hot in the world of abdominal and core training today seems to change as fast as the latest clothing styles. New gurus, new infomercials, new machines – today’s fitness marketplace is all about “what’s new.” I often write reviews about the latest, greatest ab and core training gadgets, usually debunking most of them, but this time I’m actually going to do the opposite.
As new products push their way into the fitness scene, some truly legitimate, cost effective devices get pushed out, forgotten, or even worse – dismissed as “fitness fads.” Such is the case with the swiss ball (also known as a “exercise ball”, “gym ball” or “stability ball”)

Why Some Fitness Experts Condemn The Swiss Ball

Swiss balls have been around a long time in physical therapy and rehab settings and when they crossed over into the mainstream fitness world, they were probably hyped a bit too much. It’s not that they didn’t deserve the attention, its that many fitness “experts” placed the swiss ball up on a pedestal as the end-all be-all of abdominal, core and fitness training, rather than representing the ball for what it really is – a single training tool among many- just like barbells, dumbbells, cables or any other fitness equipment.

As a result, entire training systems were built around the swiss ball (neglecting other forms of training), and people misused and overused the ball. Some trainers used the ball for “exercises” that were nothing more than circus acts. I’ve seen it all – everything from standing on top of the ball and squatting to bench pressing on the ball with 400 pounds..

As a result of the over-hyping and misuse of the swiss ball, some coaches and trainers have recently spoken up and publicly renounced the ball as a ” gimmick.” This has caused a flood of emails to pour into my office as consumers and fitness enthusiasts have become more confused than ever.

It’s no wonder: Trainer A says, “The ball is the best thing since sliced bread” and trainer B says “the ball is and always was a gimmick.” I believe the ball is a very valuable training tool and that the truth is somewhere in the middle, so I’d like to help put things back into proper perspective.

I use swiss balls nearly every day in my own workouts and in workouts for my clients. The versatility of the swiss ball is simply unmatched as proven by the fact that I can use a swiss ball to help a 65 year old sedentary woman overcome muscle weakness and improve balance or use the same ball to help a professional boxer build stamina and add power to his punches. I can also show you how to use the swiss ball to develop “six pack abs” as well as train literally every muscle in your entire body.

To give you a research-proven example of just how effective a swiss ball can be, let’s focus on one of the most basic and well-known of all abdominal exercises: The Crunch

As most people know, the crunch is a modified (partial) sit up that involves raising the head, neck and shoulder blades up off the floor. Many personal trainers believe that the crunch is highly overrated and overused. I won’t argue, as I agree there’s a lot of truth to that. However, the crunch can be greatly improved with one simple change: Do your crunches on a swiss ball.

In 2000, a study by Vera-Garcia and colleagues showed a significant increase in muscle activity in the core area while performing a crunch on the swiss ball, as compared to a floor crunch. The swiss ball improved the level of muscular activity as well as the co-recruitment of spinal stabilizers. The researchers said:

“Performing the curl over the gym ball with the feet on the floor doubled activity in the rectus abdominis muscle, and activity in the external oblique muscle increased approximately fourfold.”

Although research results have been mixed in the past, the studies showing no increase in abdominal muscle activity using a swiss ball may have been due to the exercise technique used on the ball, including velocity and body placement on the ball. Earlier this year, Dr. Eric Sternlicht and colleagues at UCLA designed a study to test this hypothesis and they measured for differences in muscle activity while using different positions on the ball.

The EMG analysis confirmed their hypothesis and demonstrated that body position on the swiss ball could decrease or increase the amount of muscular activation. When the ball was positioned with the upper back high on the ball (just below scapulae), the muscular activity was less than a floor crunch. But by strategically positioning the ball so it was firmly placed at the lower lumbar region, there was a 66%, 93% and 104% increase in upper abdominal, lower abdominal and external oblique activity, respectively.

For years I have preached about proper form on all abdominal and core exercises and I have taught my clients “little tweaks” and “tricks” in technique that look minor, but which can lead to huge improvements in results. This new research is proof. It also reveals how the ball is a versatile tool for exercise progression: The high on back position is easier, while the ball lower on the back is more difficult, accommodating for different strength and fitness levels. Further progression can be added by using resistance (dumbbell or weight plate held on chest or at arms length from chest).

Swiss balls are only one of many training tools, but in my opinion, when used properly, they are one of the best of the bunch. I created an entire core training system that uses the ball for many of the exercises, I put all my clients on swiss balls and I highly recommend that you use the ball as well. Just remember, the swiss ball is only a tool – it’s not the “end all be all” of core training and it can’t work miracles. It will also not burn fat off your stomach – you need a caloric deficit to achieve body fat reduction.

Use the ball as one part of a balanced training program that includes other tools such as free weights, cables and your own body weight. Forget the potentially dangerous “circus act” swiss ball stunts, use good exercise form, purchase only quality, high-strength exercise balls, use them in a clear area, clean them often, check them for leaks and I promise you will have a fantastic versatile training aid that will last you for years and never go out of style. Fitness fads will always come and go, but the swiss ball is still a winner.

David Grisaffi majored in physical education and is a certified high performance exercise kinesiologist with the CHEK institute. David holds a total of 6 certifications, he is a high school wrestling and baseball coach as well as an independent trainer and strength coach, known especially for his work with professional boxers and golfers. David is the author of Firm And Flatten Your Abs, an online best seller which teaches you how to lose body fat and develop “six pack abs’ while improving strength, function and athletic power at the same time. You can contact David or learn more about his programs at www.flattenyourabs.net